back to project gallery

The European training “LET’S VOTE FOR EUROPEAN CITIZENSHIP” is taking place from 03rd to 12th of July 2013 in Iasi, Romania. The project was funded with support from the European Commission through the "Youth in Action" Program.The main purpose of this training is promoting the European Year of Citizens and training  the participants as active European citizens in encouraging youth participation in the 2014 European elections.

Participants will receive a specialized Training Kit and informative materials to use in the project dissemination activities. Youthpass certificates will be given to all the participants.

Project on the EUROPEAN YEAR OF CITIZENS 2013 official web site 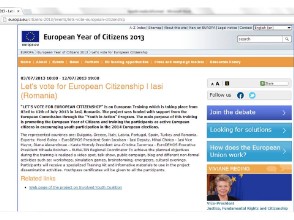